In the summer of 2010, students of the University of California Los Angeles (UCLA), School of Theater, Film & Television and graduates of ifs internationale filmschule took part in the summer school at ifs in Cologne called “People on Sunday 2010″ – referring to the film “Menschen am Sonntag” (Berlin 1930) by the German-American filmmakers Billy Wilder, Curt and Robert Siodmak, Fred Zinnemann and Edgar Ulmer. Results of the summer school were four short films created together by the German-American teams, now been combined into a compilation. 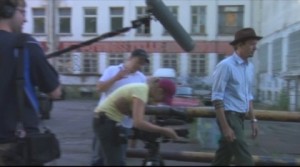 The time and setting of “People on Sunday 2010″ is a Sunday in Cologne during the Soccer World Championship in 2010. People in the big city encounter each other, love stories unravel and dissipate or they are put to the test. Each given moment in time reveals varying life situations, cultural and social backgrounds, and is condensed into an image of urban life. Even on the production level, the parallels to the original are obvious. The semi-documentary collage was shot with amateur performers, many improvisational elements, hand-held cameras and with the participation of several directors.

“People on Sunday 2010″ mirrors an attitude towards life and an image of society – completely inspired by its role model “Menschen am Sonntag” in 1930 which is considered to be an outstanding work of silent era avant-garde cinema in its upfront depiction of social reality. Its makers were driven away from Germany by the Nazis. They emigrated to the USA and heavily influenced the film industry in Hollywood. Consequently, this bilateral project looks into an almost forgotten chapter of German-American film history. “Menschen am Sonntag” thus stands for a strong interconnection of German and American film history. Now, eighty years later, “People on Sunday 2010″ interconnects contemporary German and American filmmaking.

The film productions were preceded by an academic week in which professors from both schools gave seminars on the film history and analysis of “Menschen am Sonntag” and its makers. The summer school was run under the direction of Dr. Gundolf S. Freyermuth, Professor for Comparative Media Studies at ifs, and was funded by the government of North-Rhine Westphalia, Germany. Among the participating professors were UCLA’s Dr. Jan-Christopher Horak and Becky Smith; and ifs’ Dr. Lisa Gotto, Gerd Haag and Hans-Erich Viet.